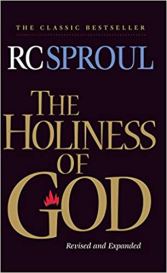 I discovered R.C. Sproul fairly recently– last year I read Chosen by God as the first book I had read by him, and I felt like I was reading an American CS Lewis. This week, thanks to my friend Mark Knight trying to consolidate his library, I started reading Sproul’s The Holiness of God. And it is a fantastic book.

Chapter Six is called “Holy Justice,” and it deals with the harsh stories of God’s judgment against Nadab and Abihu (Leviticus 10); Uzzah (1 Chronicles 13-15), the people of Sodom and Gomorrah, and the Canaanite nations that were driven out before the Israelites when they entered the Promised Land. As Sproul says in the opening paragraph, these are not stories for the faint or faint of heart.

It’s admittedly hard to square our “God is love” understanding from the New Testament with the God who put Nadab and Abihu to death for experimenting with the rituals of sacrifice. It’s even harder to think about Uzzah, whose only offense (if you could even call it an offense) was trying to keep the ark from falling into the mud when the oxen stumbled who were pulling the oxcart it was sitting on. But Sproul makes some great observations which help us understand this story:

As I was journaling on this today, it came together in a poem. I wrote the last stanza several years ago, but this expands on that one stanza. You can kind of sort of sing it to “Come Thou Fount of Every Blessing.” Enjoy.

UZZAH WASN’T, WAS HE?

Where’s the long poles that the priests hold

So their hands won’t taint it?

Put out his hand and grabbed it.

Why should we who are sinful all through

Think our hands are cleaner

Than the mud that blooms and buds at

God’s word, and earth made greener?

Obed-Edom, how we need him

To handle the ark safely

He’s a Levite; he’s got the right.

But Uzzah wasn’t, was he?

I am a pastor in Prattville, Alabama. I read a lot, write a little, and drink lots of coffee. I have three callings in life: surrender to Christ, be a husband to Trish, be a father to Caleb and Joshua. Everything else is an assignment, because everything else can be done by someone else. View all posts by jamesleejackson

reformed theology and living for the common man

Church Answers
Kingdom In The Midst

Periodic Thoughts from One Christ Follower