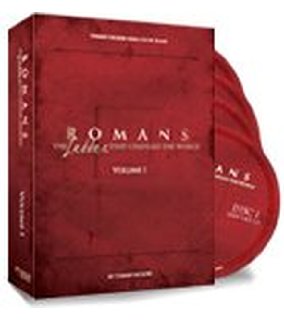 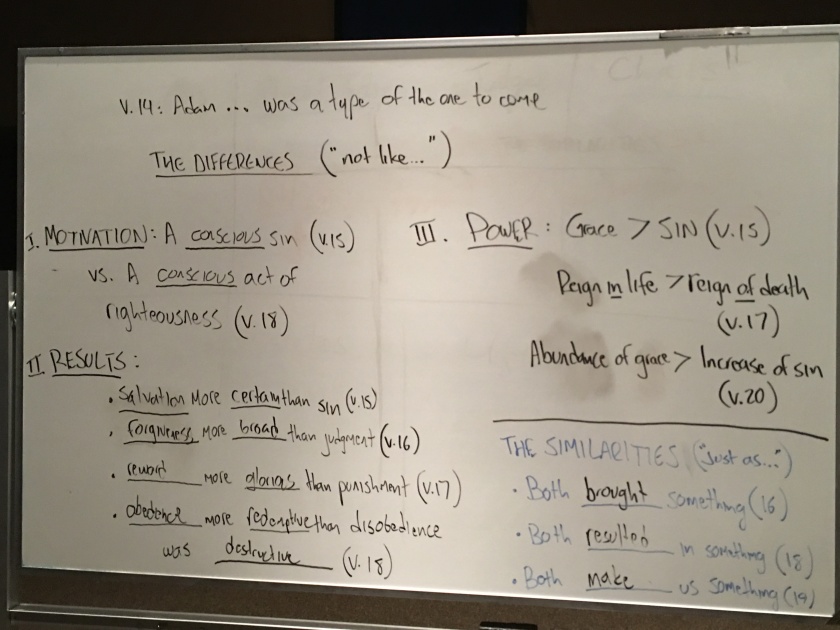 Every Monday night, I meet with a group of men for Bible study. We are in Week 8, and just

finished up Romans 5. We are using Tommy Nelson’s Romans: The Letter that Changed the World as our starting point. If you are anywhere near Prattville, AL, we’d love you to join us.

Romans 5:14 says that Adam was “a pattern of the One who is to come.” But it’s almost as if Paul realizes that he’s just compared someone to Jesus–the One with Whom there is no comparison. Tommy Nelson makes the point that Jesus is a far, far better Savior than Adam was a sinner. So no sooner does Paul say that Adam is a pattern, or type, of the one to come, that Paul starts walking back the statement.

“The gift is not like the trespass”–How they are different

Tim Keller, in his Romans 1-7 For You commentary, identifies three primary ways what Jesus did to save us is different (read: “greater”) than what Adam did to condemn us:

The Motivation was different:

Like Adam, Jesus made a conscious decision–not to sin, but to obey. Verse 18 calls this the “one act of righteousness.” In the Garden of Gethsemane, Jesus deliberately bent His will to the will of the Heavenly Father when He accepted the cross (Luke 22:42). What was His motivation? Well, first and foremost it was to bring glory to the Father. But through His obedience, we have access to the Father (Eph. 2:18). And ultimately, we will be like God, when we see Him as He is (1 John 3:2). So at the risk of oversimplification for the sake of a great Tweet, Adam bit the fruit so He could be like God. Jesus bore the Cross so we could be like God.

The Results were different:

Tommy Nelson walks through four areas in which the gift of grace through Christ is different (and far better!) than the transgression of Adam:

The Power was different:

“For Just As…” How They are Similar

Even though it seems like Paul spends more time talking about how Adam and Christ are not alike, don’t lose sight of his original thesis in verse 14: Adam served as a pattern, or type, of the one to come. So let’s end this post by looking at how the two are alike:

Conclusion: Is there any way the Trespass is Superior than the Gift?

Well… at almost every turn. You may have already noticed it, but look again at verse 18:

Does that mean that all will be justified? It does not. The condemnation of the human race through Adam is universal. But the justification through Jesus Christ is limited. It is available only to “as many as receive Him” (John 1:12). Romans 5:18 shows us that justification is available to all, but John 1:12 emphasizes that it is limited to the ones who will receive Jesus.

Next week: Antinomianism and Sanctification

reformed theology and living for the common man

Thom Rainer is the Founder and CEO of Church Answers

Kingdom In The Midst

Periodic Thoughts from One Christ Follower